A new EP/short album titled But you move on, containing exclusively original material, was released digitally September 25 2020, on all platforms, featuring Per Oddvar Johansen on the drums.

Our first album, self-titled «The Leif», was put out May 2018. It was recorded and mixed over the autumn of 2017, consisting of 10 tracks, all original compositions.

The vinyl release of the album was mid January 2019.

This piece is number two on side B of the album: 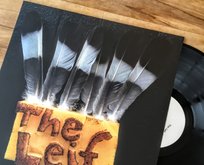